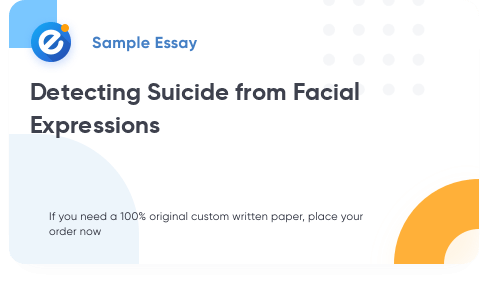 Different studies have been conducted to analyze facial expressions. For example, research indicates that gay men can be identified by their faces alone. The current research tells us that it is possible to identify a suicidal person by looking at the photos of their face. Suicide is a serious problem throughout the world, and a significant number of deaths from suicide are recorded each year. The number in reality is bigger than statistics, since some suicides are ruled out as accidents.

The article describes a group of researchers, whose experiment includes trying to identify suicidality from facial expressions by contrasting them with photos of average people. The experiment attempts to prove that suicidality can be judged from the face at a measure significantly greater than just chance. A photo can tell a million stories. In fact, high school and university yearbook photographs can give several pieces of information about an individual.

In the first experiment (study 1), 40 photos of people that had committed suicide were used. The sample included 28 men and 12 women. The photographs were culled from university and high school yearbooks. Then, the pictures were placed in contrast with different yearbook photo of a person that was still alive and was in the same race or gender category. The researchers explored Facebook and other social networking sites to ensure that the living controls wereindeed alive. Total number of photos was 80.

The photos were then standardized by turning them to gray-scale and the image was cropped to the extremes of the head and face. In one study, undergraduate students were told to use their instinct when viewing the pictures. There were 40 photos of people who committed suicides and 40 photos of living controls. Subjects were asked to determine if the person in a particular photo looked suicidal or if they believed he/she was still alive. In this study, the participants were able to identify successfully those that had committed suicide at a level substantially above chance of p=0.1

In the other study (study 2), the images were cropped further to limit any influence from the background or hairstyle. Thus, only the internal facial features could be seen. Using the same method, participants examined the photos and were able to identify successfully the people that had committed suicide at a better chance of [=.005]

In the first study, the undergraduate students rated the photos on the basis of depression, satisfaction with life, hopelessness or impulsivity. The researchers thought that the photos of the people that had committed suicide seemed a little bit more depressed. The assumption indicated that inferences of impulsivity and depression contributed to the participant’s suicidal perception.

Suicides are linked to people getting involved in the impulsive acts of violence. Participants were asked to rate the people in the photos on their ability to make impulsive purchases or get involved in an impulsive violent or sexual behavior. The ones picked to be more impulsive were likely to be suicidal. Since suicide is an act of violence against oneself, the researchers concluded that there is a cue from the facial features that shows impulsive violence to the observer.

A higher number of males were seen to be suicidal. The reason is that there was a higher perceived impulsivity and depression among males. However, the research had several limitations, since the work was based solely on perceptions. Moreover, convenience samples were used, and therefore results could not be completely bias-free. Therefore, further research is needed to affirm these results.

Get 17% off all services