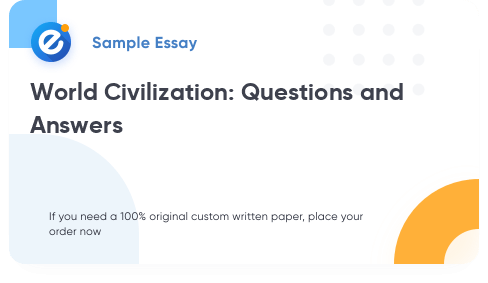 Q.1. Impact of Western imperialism on China and Southern Africa from the 1800s to 1914

During the 1800-1914 period, the world witnessed a new wave of imperialism. Western nations reeling on the heels of the second industrial revolution set out to conquer the world. The industrial revolution enhanced the faster growth of science and technology. It created an economic need, improved steel production, and encouraged shipbuilding that made traveling easy and justified colonization. The Chinese people benefited from imperialism between1800-1914 more than they were harmed by it. The same cannot be said of imperialism in South Africa. The following paper seeks to justify these claims.

Imperialism in China happened under the British rule with Britain occupying significant territory in China.  The British presence in China had both positive and negative effects on China. One of the positive impacts is the revolution when the Boxer Rebellion had failed and many Chinese were convinced that reforms were necessary. In 1911, the revolution broke out throughout the entire country ousting the Munchu emperor setting the stage for modern China and consequently the establishment of the Republic of China.

Another positive aspect of imperialism was democracy. After the revolution, Sun Yat-sen (1906) took over and presided over elections of government officials, thus ushering a new dawn of democracy that was one of his key pillars for nationalism. Through imperialism, China acquired means of improving livelihoods through Western industrial methods and agriculture. Europeans and mostly the British brought and set industries in China, thus industrializing the country (Isaacs, 2010).

However, imperialism in China had its share of shortcomings. During the imperialism period, China was in the state of a constant war and experienced the loss of life and destruction of property. During the Taiping rebellion, peasants of Guangxi province armed themselves to fight under Hong Xiu Quam and more than 20 million were killed in 1856-1866. Wars like the Opium War that ended with the Naiking treaty of 1842 and the Boxer Rebellion of 1901 weakened the Munchu dynasty.

Imperialism disadvantaged China regarding trade. After the Opium War, unequal treaties were signed by the British, giving them unfair leases over ports. China lost sovereignty to Britain and suffered disadvantageous trade policies imposed on them by Britain. An example is the open door policy (1900) that gave European countries equal trade rights in China. After the Opium Wars, Chinese ports were opened to European countries, thus increasing the amount of opium exported to China (Dikötter, 2013).

While imperialism in China had both negative and positive effects, positive effects outweigh the negative ones as it led to revolutions, democracy, industrialization, and better livelihood through modern agriculture.

Imperialism took place in Africa at the time of slave trade. Tribal wars and slave trade weakened the native army of the Zulu and the army that had suppressed the Boers and neighboring tribes. The Berlin conference was used to divide Africa among European powers to avoid conflict. Imperialism had both negative and positive effects in South Africa (Clark & Worger, 2013).

One of the positive impacts of imperialism in South Africa was industrialization. After the Boer Wars, the British conquered Africa and started imparting the technology and culture on the locals. Industrialization led to modernization, which improved the livelihood of native Africans. Through Christian missionaries, schools were built in Africa that improved the literacy level.

Conversely, imperialism had an adverse effect on South Africa as well. Imperialism killed the local industry, destroyed the culture, while local goods were replaced with imported goods. During imperialism, colonial powers siphoned the colony’s natural wealth and resources, leaving South Africa in poverty and poor living conditions. Most of the present day inequality issues result from the imperialism era. Europeans planted seeds of discord among African territories and set them against each other through divide and rule, which led to prolonged ethnic wars, while the imperialists took the opportunity to loot (Beck, 2000).

Benefit from Our Service: Save 25%

Along with the first order offer - 15% discount, you save extra 10%
since we provide 300 words/page instead of 275 words/page

Imperialism led to the decay of local culture. Europeans believed that their culture was superior, thus they forced Africans to shun their way and adopt the European culture. Moreover, imperialism led to the breakdown of the African political system. The great Zulu empire crumbled under the British invasion. Such policies later gave roots to civil conflicts that rocked South African nations long after the British had left.

In South Africa, imperialism caused more harm than good to the native community. The British grabbed land, forced locals into labor, and brought with them chicken pox. The demand for cash crops caused a lot of food shortage as the locals abandoned traditional crops for cash crops. Besides, subsistence farming was replaced with commercial farming, thus causing major food shortage in South Africa. Hence, imperialism affected the nation negatively in South Africa.

Q.2. How did Ottoman decline and Tanzimat Reforms affect the provinces of West Asia and North Africa?

In the seventeenth century, the Ottomans lost their powers. This decline affected the governance structure of the Ottoman Empire. China penetrated into its market, while Europeans encroached the empire and traded at a very high price. All these factors led to the decline of Ottoman rule both in West Asia and North Africa. The decline of the Ottomans and Tanzimat Reforms liberated North Africa and West Asia provinces. The following discussion analyzes the effect of this decline and the reforms in an attempt to justify the aforesaid claim.

Get order proofread by editor $3.99

SMS notification of the order status $3.00

Get a full PDF plagiarism report $5.99

With the decline of the Ottoman Empire and rapidly spreading imperialism, Tanzimat Reforms were meant to revolutionize the Ottoman Empire and reform it so that it would be in line with the European way. The education system, culture, religion, and society were aligned with the Western ways. The empire became westernized with an adoption of Western military modes and politics was played in the Western style as well. These reforms affected the Ottoman territory of West Asia and North Africa in many ways.

Tanzimat Reforms led to the introduction of justice and order in West Asia and North Africa. To realize social and economic change, justice and order had to be first enacted. There were edicts that were supposed to promote justice and build citizens’ confidence in the government.  It also created the law system that recognized non-Muslims. The Gulhane edict of 1839 expanded military mobilization and the empire expanded secular schools (Hourani, 2013).

The decline of the Ottoman Empire coincided with the imperialism, which allowed the British to establish economic blocks within Asia and North Africa, specifically Egypt.  Tanzimat Reforms helped in building of roads, ports, and other economic structures that expanded trade and facilitated transport of goods. These led to the boom in export and international trade, thus giving rise to the first stage of the bourgeoisie culture.

Benefit from the incredible oppportunity
at a very reasonable Price

Tanzimat Reforms also gave leeway for agricultural activities by designing the Ottoman land code of 1858, which regularized land holding patterns to streamline the tax collection process. The land code also protected peasant farmers by ensuring they dealt only with the state.

During these periods, Europeans penetrated North Africa, bringing with them arms, a huge amount of capital investment, and cheaper access to credit. A lot of investment took place without proper funding and when the facilities were called upon by the Ottomans, the entire region plunged into debt. Europeans stepped in and the Ottomans lost their sovereignty (Davison, 2015).

The Tanzimat reform program organized central and provincial bureaucracy, restructured the military, and built infrastructures that facilitated trade like roads and ports.  It was during this period that the Suez Canal was built, which opened up North Africa to Europe through Asia. It also ensured justice and order, while social stability and economic participation increased.

Another effect of Tanzimat Reforms was the Hatt-i-humayan decree that liberalized religion by breaking religious autonomy, gaining trust of the Christians and creating a sense of nationalism. Creation of the secular identity led to the creation of more educational openings as the higher education became accessible for civilians and not only the military. Secular courts were also created to handle conflict between Muslims and Christians.

Q.3. Why did the competing alliance systems between European countries (notably, Germany, Britain and France) help to promote war rather than prevent it?

Towards the end of the nineteenth century, European countries entered alliances with each other to protect sovereignty, promote military interests, ensure support during wars, and facilitate trade when there was no war. It is therefore possible to say that the Western alliances precipitated war. The following passages examine unions formed during that time with account for interests of their members.

Alliances were agreements of mutual advantages made between two or more nations with common enemies to fight with each other at times of war and to support each other during the times of peace. Western Europe, the Ottoman Empire, the Balkans, and Russians all entered into an alliance. Alliances were not treaties or friendship. The following alliances took place in Europe.

From all orders made by people you bring!

Your people also get 17% discount for their first order

The Three Emperors’ League was created by Germans, Russians, and Austria-Hungarians in 1873. Its main purpose was to share matters of common interest and maintain neutrality should one of them get in conflict with another. The alliance died in 1887 (Kaya, 2014).

The next alliance was the Reinsurance Treaty of 1887 that involved Germany and Russia, which were to maintain neutrality in case of war (Kaya, 2014). This agreement was canceled in 1911. The Franco-Russian alliance of 1892 came into being; this alliance was formed against the Triple Alliance. If any member of the Triple Alliance mobilized, the two nations would mobilize as well and should the war begin, Russia and France would fight side by side.

Additionally, the Entente Cordial of 1904 was the alliance that Britain and France entered to settle all outstanding colonial issues, especially in Morocco and Egypt. This agreement opened a series of talks between the two governments’ militaries. Finally, the Anglo-Russian Accord of 1907 envisioned Britain and Russia agreeing to settle colonial disputes, especially in Tibet, Afghanistan, and Persia. This accord gave birth to the Triple Alliance made up of Britain, Russia, and France.

While forming alliances, Britain and Germany were busy with building the navy and engaging in a show of their might. This show of might divided Europe into two parts with Germany, Austria-Hungary, and Italy being pitted against the Triple Entente alliance of Britain, Russia, and France. The agreement caused division of Europe into two armed camps, which meant that any offense of any of the countries in either camp would trigger war. Were it not for the alliances, smaller powers like the Balkans would not have the authority to cause a crisis that would later turn into a war.

The competing interests of individual members were the primary cause of war. Looking for revenge after the Franco-Prussian war, Austria-Hungary was at odds with Russia over the Balkans, Italy was angry at furnace for forestalling Italy’s advance by occupying Tunis, Britain was amassing superior navy to protect its colonies, while Russia was secretly building its navy to counter that of Britain (Wilkinson, 2006). These competing interests reached a peak when Bosnia and Herzegovina were annexed and the assassination of the arch duke took place in Sarajevo.

While ideally the alliances were supposed to prevent war, secret dealings and the military hysteria of that time coupled with competing interests of members helped brew war. The alliances could not stop war as members had no trust among themselves, while having conflicting interests.

Special offer for new customers! Get 15% OFF with code first15 Order now